A walk in the moonlight

This week’s writing challenge is all about blogging your neighborhood and I think I can give a compelling account of where I live. I’ve been back in Massachusetts for close to two years now and prior to that I lived in Albuquerque for six and a half years, and Florida for six months. I moved to Albuquerque for college from the home I’m living in now and coming back into a scenery that didn’t feel natural anymore left me feeling uneasy for awhile. Here’s a little narrative about the situation:

It was around 11:30 p.m. and the house was too hot to take. In the hope of being seduced by the night breeze I descended my stairwell, found my sandals and my cell phone and head for the door. Patty was alive then, my Siberian Husky with two different colored eyes. She looked up from her chair as if to question where I was going. I said something along the lines of “not this time pup,” I kind of wish I took her. 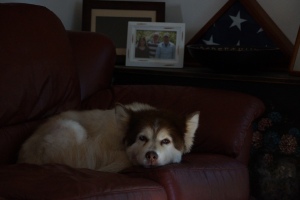 Regardless I unlocked the side door and ventured outward. For seven years I had been on my own, wandering in and out of places, meeting different people and all of a sudden I was back. I was living in the house where I last lived when I was 18. Even though my parents were incredibly gracious for giving me the opportunity to move back and refocus on school, the sheer fact of being back came with self-imposed constraints. The little detours and proclivities of my past life could not be as efficiently managed as they were when I was on my own. I think I went for the walk to get a chance to refocus my head as much as I went to cool down.

I went right for no particular reason. Maybe it was habit. Right led to the main road (we live on an enclosed circle of houses with one real entrance/exit), the existence of new life. I remember looking at the various houses. Nothing looked real. They looked like cardboard cutouts of the things or people who use to be there. It was then that I remembered working at Disney. An oddly similar feeling came across when I looked at the buildings. They were there, I’m sure they had things or people within them, but something was missing. Something didn’t feel real.

I thought of the people who used to live in each place, the friends I had and the people I waved to when they passed by. For seven years I did not see nor think of these people and what they were doing. Most of my friends left. They went to colleges and got jobs and moved away – like normal people. The houses, shrouded in the darkness of night, were ghosts of people whose existence, at least in my perception of them, remained unfinished. Each house, as I turned the corner to the new road, was a testament to a person, people, and a place in time that I knew nothing about and most likely would never know nothing about. Being around so many tombs of unfinished stories was unsettling.

The second of the four road circle that is my block houses the exit/entry that I mentioned earlier. Neighborhood yard sales and elementary school bus stops pierced through my memory and I had to stop and look at the simple strip of land for some seconds longer. It was a patch of dirt that people driving by would not associate with anything, likely. It was a patch of dirt that goes ignored as the inhabitants of the neighborhood race off to the requirements of their individual lives. But, at that moment in the middle of the night, I was witness to the decades of grandeur that was once showered upon it. When Patty was younger we would walk to this point and race all the way back to the house. That hadn’t happened in seven years.

The next strip of road, the road parallel to mine, was always the fun sledding road. Our block was so unburdened by traffic that we could dominate the area during a snow day without constant shouting of “car!” It also housed the path to the graveyard which everyone would cut across to get to the middle school (if you walked). The trail through the woods was still there, I could see it, but the entry way had been overrun by vines and other bushes. It felt disjointed, like the houses. Another story written and locked away in a time I knew nothing of. This journey was turning into an existential crisis I was unprepared for. Fresh air never felt so suffocating.

The last road was at the back of our block. Nothing really ever happened there. It was always just there and it remained there during my venture. One time my dad and I searched for my cat through another path by there, but I have no other vibrant memories outside of that. As i made the turn to the road that housed my house I found myself wondering about the memories of the people with homes on this road. Was it significant or was it just a road to them?

My house was on the middle of our road so I had to walk the second half of it to get back home. A lot of my close friends lived in this section of the neighborhood. The solid foundations of former lives have turned into Facebook profiles and a faltering exchange of text messages every now and then. But that’s what happens right? People move away and pursue their own lives. The foundations of our environment crumble if we are not in constant contact. Seven years away brought thousands of days with plenty of opportunities to stay in contact with the people and places that made me. As I walked into my driveway and leaned against my car I felt guilty.

I sat on the front stoop for a little while before I went in and watched the fireflies. They were always outside during this part of summer and they made midnight look like mid-morning. I’d seen a lot of beauty in my adventures: I’d seen a desert sunset, made kids laugh inside of the Magic Kingdom, held someone I loved while watching the stars, but somehow I forgot about the fireflies in my front yard. I was lucky to have grown up here even if here doesn’t feel like here anymore.

Like I said in my intro, that walk was close to two years ago. Earlier today I took the little dog and cat outside and sat on the stoop by the front door. The flowers are beginning to bloom and everything looks so green and vibrant. I still have days when I feel like I’m rereading a chapter of my life that was written by a different pen. But then there are moments when I think about the fireflies, or the pets, and I bask in those little instances. I think memories give our realities purpose. Things may not be the way they were or things may not be how I want them to be, but the memory gives me a template for a time or place that I could one day create again.