(I Still have work to do on this project. But it is definitely a solid skeleton to start with for the comparison paper)

Portraits are often astute encapsulations of beauty. The perspective of the artist tells a tale of sex, substance and solitude in a society that can often be ambivalent to form, figure and focus. Two portraits that offer an opinion on such matters are Edouard Manet’s “A Bar at the Foiles-Bergere,” of impressionist style, and Francisco Goya’s “The Clothed Maja” from the Romantic period. The paintings both feature a shot of a women who are isolated, but very aware of the attention they are receiving. The two works offer many insights to humanity, yet differ in multiple ways.

Manet’s work features a woman named Suzon who is working at the bar inside of the Foiles-Bergere, a popular Parisian café, according to a portrait of the week series on The Guardian. She appears disinterested and is waiting on a man whose reflection we see in the mirror. 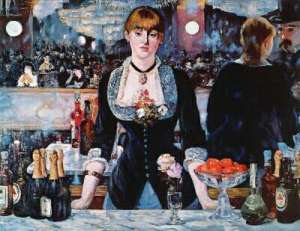 The first thing to note in this is Manet’s use of colors. A portion of the painting is routed in shades of blue. The majority of Suzon’s outfit is blue, the table she is leaning upon is blue and the chandelier’s, and other objects in the top third of the painting, are blue. Excessive use of the color blue resonates an aura of somberness – a theme that gives the painting a sense of desperation, loneliness and longing.

Another facet to Manet’s painting is the issue of perspective. The painting features a woman staring straight ahead, almost as if she was looking directly at whoever the observer of the painting may be. What some may disregard is the man featured to the right of the woman who is clearly engaged in some sort of conversation with her. With the woman staring directly ahead and the presence of the man in the picture, it can be argued that the man is the one who is perceiving the woman featured in the picture. We are that man.

The question then arises to why we are engaged with this woman through the eyes of the man. Does the man have the somber qualities that are apparent in the blue themes of the painting? Is he lonely and looking for more than a drink from Suzon? The perception of her beauty is something that can be discussed further. From the eyes of the observer she is a slender, well-bosomed woman. But her image looks distorted in the reflection of the mirror. She appears larger and more abstract in the reflection of the mirror. What commentary is Manet trying to make?

Jonathon Jones’ Guardian analysis contends that Manet’s focus was on Suzon. She is the only one in focus in the picture and Jones says that is because she is alienated from her surroundings. Furthermore, Suzon’s grasp on the bar shows that her job is her only grasp on reality, according to Jones.

Francisco Goya’s “The Clothed Maja” is another portrait of a woman but it doesn’t offer the greater emotional/metaphysical implications that the work of Manet does. Goya’s Maja seems to be routed much more in the realms of feminine sexuality.

There are two color schemes that blend well in the Maja. A portion of the painting is white, namely the bed and about two-thirds of the woman. White obviously brings about thoughts of purity, when used with the bed (with the woman on it0 it is arguable that Goya is commenting on the woman’s sexual purity.

In regards to the woman’s sexual purity, the way Goya uses colors on the woman is significant. The lower two thirds of the woman is shrouded in the white clothing while her shoulders, arms and head are displayed in an assortment of colors. There is a contrast between the pure reproductive portions of the woman and her multi-dimensional intellect.

Posture is another aspect to the painting that has relevance. The woman featured in the painting has a relaxed, almost inviting posture. Her arms are wrapped behind her head and her eyes command a direct line of sight that draws all attention to her. Because of her inviting aura and the relative solitude of the painting, there is an unmistakable feel of promiscuity.

Another interesting component to the painting that ads to the sexual nature is the fact that the woman in the shot appears highlighted. The brown background contrasted with the varying degrees of white on the woman’s body

While the two paintings both prominently feature a woman, the tones of each shot are very different. The bar is somber, the maja is empowering; the bar is introspective, the maja is overt. The differences in the paintings showcase how the medium of the portrait can be used to display different things, all dependent on the intended message of the artist. The message in these paintings both focus on an issue within the woman. Manet uses a crowded room to display the solitude of humanity and Goya uses a private space to discuss the social conventions of the individual.