I’m supposed to be breaking down film right now. I’m putting it off a little bit. Not because it’s Thanksgiving and not because I don’t love breaking down film (It’s really a sick obsession of mine), I think I’m putting it off because, really, it’s the last true important thing I have to do this year. Last night, The Pope John Paul 2 Lions beat our Thanksgiving Day rivals (that we play the day before Thanksgiving) Bishop Connolly 44-33.

It’s been a bit of a whirl-wind past couple of days. Yesterday was the game, before that we had our last practice of the season and “The Burning of the Ball” – a event where the Seniors get to say their goodbyes to the coaches and the underclassmen.

I really liked this shot. 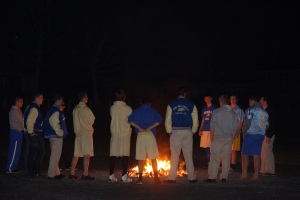 The night before the game was an emotional time. PJP has a tradition where they give each Senior a football and have them say a few words before tossing the football into the fire. They call it “The Burning of the Ball”. Before they did that, coach said farewell to his seniors in a private chapel ceremony. And before that, we showed a couple of different videos to the kids; talking about thanksgiving, settling old disputes and even one impersonating coach.  Watching coach talk to his seniors, the seniors talk to the underclassmen, and the coaches talking to the team was nothing short of a true genuine moment. Here is a video the coaches did before the burning of the ball:

And here is a video we showed the team just before we left to take the field. This one was much more of a psych-up video:

The burning of the ball was one of those experiences I think I will always remember. I’ve always believed to people that football is one of those sports that means so much to the people who are involved in it and on that night I saw my belief reinforced by listening to all of these different people get to speak. That experience is something that will stick with me for a long time. 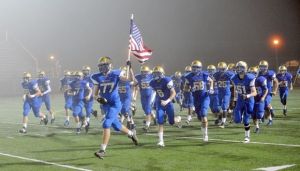 The game was one of the most distressing, anxiety-driven, painfully tense and most gratifying moments of my life. Throughout the year I would listen to the older coaches talk about reasons “Why you coach” and I never really fully understood it until now. I always loved my kids and enjoyed spending the time I put into it with them, but I didn’t really get it until last night. The last night. The game with the meaning attached to it.

It rained. It rained sideways, as my dad would later tell me (I didn’t really notice). It was windy and, in times, a dense fog clouded the area that made feel like a scene lifted from Any Given Sunday or Friday Night Lights.

We came out well. By the end of the First Quarter the score was 22-13 and the offense was moving the ball in a with ease in the poor weather. The middle quarters were the main deterrent to the game. In the second quarter Bishop Connolly scored 20 unanswered points which led us into halftime with a 22-33 deficit. But after a halftime adjustment the defense righted the ship in the third quarter and the offense followed in the fourth. Eventually (and I know how minimalistic this is – if you want to read an actual review of the game, check out this CCT article) we put up 22 unanswered and sent Bishop Connolly home to tasteless Thursday turkey.

I don’t know how to end this. On Monday we go in to return equipment and plan the banquet. After that, the season is done. It’s over. I don’t know what to say.

I am so happy I got to spend my first year as a assistant coach with this group of individuals. I can’t wait for year two.

Posted in Daily Updates, Diary of a young coach, Football