For the first Movie Retrospective on this site i am going to take another look at the movie currently inside of my PS3, “Pineapple Express,” (which henceforth will be abbreviated as PE).

The Seth Rogen, James Franco and Danny McBride “weed action movie” first hit the screens in 2008. Here is a quick synopsis from IMDB:

“A process server and his marijuana dealer wind up on the run from hitmen and a corrupt police officer after he witness his dealer’s boss murder a competitor while trying to serve papers on him.” -IMDB synopsis

And then hilarity ensues. 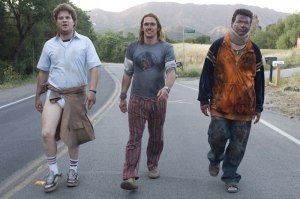 There is a point on the commentary track that i want to touch on first. It is a big cast and crew commentary where they essentially just watch the movie, but one of the things that they talked about was what message does PE send about weed? The people in the commentary, which was essentially the entire cast, agreed that it had a negative opinion on drugs – referencing the speech Rogen gives to Franco about his life being in shambles. What led me to write about this movie first is something Judd Apatow noted. He thought the movie has a different affect depending on the age of the viewer. His point was if you;re 19, you’re probably watching this and getting high. If you’re 26, you’re looking at this and saying i need to get my shit together.

Let me make this clear: I don’t get high. I actually never have (by intention, at least). I’ve had roommates that have lit up and friends that do it on a pretty consistent basis. I guess my best opinion on the subject is i am weed sympathetic.

This explains why i really like PE. If you have seen people do shit similar to what is going on in the film you are going to connect to it a bit more easily.

I’m not going to rate the movie in these little posts. I just came to that decision. Let’s carry on.

Ok, now don’t cheat, can you name the actress that played the girlfriend? Comment if you can.

THE GIST OF IT: PE is the perfect party movie (so long as you are not pretentious as fuck. But then again, if you are, you can mock it. I guess) or a great way to kill two hours on a Saturday. It isn’t an academy award winner or a triumph of cinematic works. Oh shit, check that. James Franco was nominated for a Golden Globe for this. I wonder how common knowledge that is? That kind of changes the ending.

Do you want to see a movie that had an actor lose a Golden Globe and go unnominated at the Oscars?